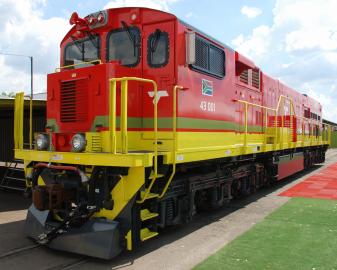 Knorr-Bremse was started in Germany back in 1905 and over the years it has expanded across the globe to become the world’s leading manufacturer of braking systems for rail and commercial vehicles.

Knorr-Bremse’s South African subsidiary was established in 1969 and first production at its factory in Johannesburg started in 1971, providing a unique local manufacturing option for the domestic market.

Today the SA business has two more offices in Cape Town and Durban, over 150 employees and the capability to spearhead new projects as well as offer reliable maintenance for its customers in the rail and commercial vehicle industry in Africa and beyond.

Knorr-Bremse’s other lines of business in the rail vehicle systems outside of braking components, include: automatic, electro-pneumatic or electric door systems, air conditioning systems, control components and windscreen wiper systems, as well as platform screen doors. In the commercial vehicle systems sector, the product range includes complete braking systems with driver assistance systems, as well as torsional vibration dampers and powertrain-related solutions such as the Pneumatic Booster System (PBS) and transmission control system for enhanced energy efficiency and fuel economy.

Ahead of the Pack

One of the brand’s most competitive edges is its immense longevity in the business, and with over 100 years to perfect its products, Knorr-Bremse has garnered an enviable reputation for pioneering and continuing to lead the development, production, marketing and servicing of state-of-the-art braking systems.

However, the company has another strategic advantage to international players looking to grab a piece of Africa’s growing economic pie – it has had almost 45 years of local experience working in South Africa’s evolving landscape.

“We are already in a position where we are currently manufacturing for the South African railway industry as well as exporting our AAR products into the international world,” says Nico Basson, managing director of Knorr-Bremse SA. “It’s one thing to have a company in the country, but we have experience dealing with suppliers in the country. We know what’s required from a quality perspective and from a lead time perspective… If you want to start in a new environment and culture, you have a learning curve, which is at least three to four years, before you understand how the industry works. I think that puts us in a very unique situation.”

Knorr-Bremse SA’s 9,000 square metre factory is described as a “state-of-the-art equipped manufacturing plant” situated in Spartan, Kempton Park. It has been successfully transformed into an export driven operation and the DB60 freight wagon valve is currently its primary export. As one of only two factories around the world to manufacture this AAR approved valve, the South African product is now equipped on rolling stock on six continents. The factory also produces valves and spares for all braking requirements.

“As far as quality, the company has all the ISO qualifications required, but what we’re really proud of is the fact that we have IRIS (International Railway Industry Standards) approval,” says Andrae Nieuwoudt, general manager of Knorr-Bremse SA.

Nieuwoudt says IRIS is a globally recognised standard that is adopted in Europe that companies supplying to the railway sector have to comply with, to encourage safety and standardisation in the industry. Knorr-Bremse has 30 locations around the world with IRIS approval, and the factory in South Africa is the only brakes company in the continent to have been awarded with this highly-regarded certificate.

Due to its thorough understanding of South Africa’s business requirements, as well as being invested in the country’s underlying goal to uplift previously disadvantaged individuals and create opportunities for a new generation of skilled workers, Knorr-Bremse SA has also achieved Level 3 in South Africa’s Broad-Based Black Economic Empowerment (BBB-EE) requirements, the highest value given to a foreign-owned company. To have achieved that, “25 per cent of the company belongs to black-owned organisations,” says Basson.

South Africa’s rail sector has been slowly deteriorating due to lack of investment and upgrade for nearly three decades. However, over the past five years, interest from local and international companies looking to tap into the country’s wealth of resources, as well as events like the FIFA World Cup in 2010 bringing people from across the globe into the heart of South Africa’s cities, the government has put a renewed focus on its transportation infrastructure and operators like Passenger Rail Agency of South Africa and Transnet have been  churning out tenders worth billions of rand to help modernise the country’s passenger and freight trains and railways.

As such, companies like Knorr-Bremse SA have had an opportunity to become involved in some high-profile projects.

“What you need to understand is more than 80 per cent of all rolling stock (locomotives, wagons, passenger cars) in the country have our brakes on and this has given us that unique competitive edge. We were successful in the past and that has helped us maintain our lead,” says Nieuwoudt.

In 2010, Knorr-Bremse SA was also involved in the Gautrain project around the 2010 FIFA World Cup – to connect Johannesburg and Pretoria with the Johannesburg International Airport.

Canadian manufacturer Bombardier won the contract and placed its Electrostar passenger trains, which were doing very well in the UK, on Gautrain. Knorr-Bremse was already supplying the brake systems, the door systems, and air supply systems for the Electrostar’s in the UK, and thus in South Africa the local company’s role was to provide support for warranty purposes as well as manufacture some of the parts at the Kempton Park factory, an option that was much more efficient than importing from Europe, explains Nieuwoudt.

“Because so much earthworks and construction had to be done, the rolling stock itself had a very small value to the total of the [Gautrain] project,” explains Basson. “Our role now will become much bigger as we exit the warranty period and into the lifecycle phase where we will locally look after the KB systems on that train.”

In the short term, Knorr-Bremse South Africa will be exhibiting at the 16th annual Africa Transport and Infrastructure show in Johannesburg, which Basson believes is integral to attend, more than ever.

“With regards to everything that’s happening in rail, we can’t afford not to be there,” he says. “People know who we are, what we’re involved with and what we stand for. But it’s very important for us to show that presence so people are aware we are walking the talk.”

Looking to the future, Basson says Knorr-Bremse’s goals are clear: to support the South African rail industry with its current expansion.

In the next five to 10 years, Basson plans to localise further, to generate hundreds of more jobs as the company doubles its capacity while developing workers’ skills in the industry, and to produce more content in its South African plant to export to rail and commercial vehicle clients around the world.

“We’re obviously not complacent about it,” says Basson. “If you run a race and you are in the front, you are the only person every other person is chasing. We are very aware of that. Because we are in the lead, we want to stay in the lead.”