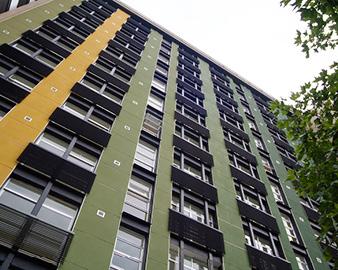 Property development can be a tricky business at the best of times, ensuring you’re dealing with the best contractors and getting your builds in on time and within budget, but how much more do you have to think about when you’re dealing with a very specific community of residents? Josef Talotta, head of precinct development for South Point, is tasked with responding to the needs of their tenants who are chiefly comprised of university student residents. Working with the Johannesburg Development Agency and other stakeholders, South Point has developed the district of Braamfontein, home to the University of the Witwatersrand – a globally recognised and rated institution celebrating its 90th year.

“Johannesburg, from a development point of view, is more like LA or Sydney than New York or London, it is a sprawling city that has been built layer upon layer, decade by decade, from the city centre where it was first established,” says Talotta, giving me a quick potted history of the nature of the place where they are based. He says that while Braamfontein came to prominence in the 1950s as one of Johannesburg’s first decentralised nodes, by 2000 the district had bottomed out and was suffering quite a bit from dilapidation. “The bulk of the building stock in this area was 1950s era buildings – 15 to 20 storey buildings – mostly excess office stock left behind when other areas came into fashion. These offices were under-utilised– they were very good value for money for what you were getting.” As these properties came on the market, another fact was emerging: student numbers in South Africa were growing. “The growth in university student numbers in South Africa has doubled in the last 20 years. However, on-campus housing has not kept pace with the student number growth.”

South Point was established in 2003 and saw the great opportunity in redeveloping office buildings close to universities. They now own more than 20 buildings in the Braamfontein area alone. “Because we own entire city blocks,” explains Talotta, “we can make a meaningful contribution to the uplifting of this area. My key strategy for the area was to develop it from a convenience stay to a lifestyle stay. So we have a hotel, five office blocks and the balance is student accommodation. The hotel has been upgraded and the retail has been revitalised.”

Talotta says that the street level strategy for the district is to create a more student friendly rather than the usual urban environment. “What had happened at the street level retail offering was growth that had been organic over the last two decades and was in line with the wider context of the country, with in-flows from Asia, Eastern Europe and other parts of Africa. So you had computer shops run by Nigerians, takeaways run by Serbians and convenience stores run by Pakistanis or Bangladeshis. This pattern repeated itself block after block with minimal student offerings – no place to go get a cappuccino or to go see an art exhibition. So we keep most of the tenants but we shuffle them around to create a more student friendly offering and better pedestrian flows. A bookstore has recently opened, and there are art galleries, coffee bars and roasteries – we’ve put the cultural infusion in.”

Over the nine years of South Point’s far-thinking developments, hundreds of millions of rands have been spent, some buildings have been gutted out and rebuilt and others simply re-clad. The revitalisation process has brought new energy to the district and now artisanal food and organic wines are on offer at a neighbouring developer’s popular Saturday food market– changing the face of the area entirely from just two years ago.

If you check out the company’s website, some of the rules for student tenants seem a bit on the strict side so we wondered why that was. “Our core business is student accommodation,” says Talotta, “everything we do is filtered through that. We’re not landlords per se, we provide student accommodation and a student lifestyle – we’re partners in their education.

“To further contextualise, many of our students come from outlying provinces of South Africa like Mpumalanga or Limpopo. Many are not urbanised and many are first-generation university students from villages and smaller centres. The house rules are there because their parents are leaving them in our hands at age 18 or 19 and some of them probably won’t have crossed a four-lane street in their lives. There’s a variety – our price range is from around R2000 a month up to R7500 a month, where you get a two storey penthouse apartment. These are kids who are clever and would have excelled in their secondary education.

We keep an eye on them whether they are on a scholarship or their parents are paying.

“So it’s run quite tightly, no booze allowed in the buildings, there are designated smoking areas outside, no nonsense, no overnight guests, no hanky-panky… no fun really [laughs]– you’re here to study!” Given the prestige of going to Wits University or the University of Johannesburg there is little doubt that the students themselves are keen to knuckle down and get the right results.

With a huge variety of student support from transport links to sports and events flag-ups, parents can rest assured that their children are in a safe environment while students can ensure they work and play hard. Good property development always has the end user in its sights: in that, South Point is definitely a pioneer.