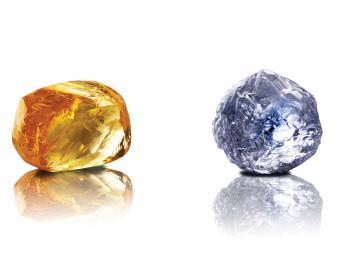 While it’s questionable that diamonds are forever, they certainly have an endless ability to enchant and keep people coming back for more. You could say that’s what happened to Firestone Diamonds’ incoming Chief Executive, Stuart Brown, a former Group Chief Financial Officer for De Beers with 20 years of experience in the diamond industry.

“I left De Beers in 2011 and had a two-year non-compete clause. I wasn’t intending on re-joining the diamond industry,” he explains, “however, a project then came along. I met the chairman and one of the large shareholders and the more I looked at it, the more I liked it. I did quite a lot of pre-work for it and got quite excited.”

That project was the Liqhobong diamond mine in the Kingdom of Lesotho, a small country within the bounds of South Africa. Initially discovered in the 1960s, Liqhobong was first mined in 2005, with production being suspended in 2008. UK-based junior miner Firestone Diamonds acquired the project in 2010 and began small-scale production through a pilot plant in 2011. Holding diamonds valued at more than US$107 per carat, adding up to a gross in-situ value of $1.9 billion (total resource of the current proposed project), Liqhobong was too good an opportunity for Brown to pass up and in September 2011 he joined the Firestone Board.

“It’s a very good project. I like the fact that it’s developing a mine from start to finish, and that I’m working to build something that’s permanent and will leave a lasting legacy in the country,” he comments.

“I thought that all of the experience I’d gained in dealing with African governments with De Beers would stand me in good stead and I was keen to drive a project forward with a team that was really excited about delivering it. When I looked at everything together, getting back in the game just made good sense.”

Since joining Firestone, Brown has assisted in revalidating the Liqhobong mine’s numbers and checking that what’s been said about it is correct. He has replaced Tim Wilkes who will remain an Executive Director in the company. His goal from here is to raise the money to construct a new processing plant, making possible a 1-million-carat-per-annum diamond mining operation.

The lay of the land

Lesotho – although renowned for its production of large gemstones – has a challenging, high-altitude terrain that has largely served to deter miners. Gem Diamonds operates the country’s only mine at present. Firestone’s Liqhobong project sits in the north of the country, at the head of the Liqhobong Valley in the Maloti Mountains. It is officially operated by Liqhobong Mining Development Company Pty Limited, owned 75 per cent by Firestone and 25 per cent by the Government of Lesotho. Brown comments that the Government has been “a very supportive partner,” providing not only the asset but also assistance in interpreting legislation.

“The government brings their cooperation and understanding because they are going to benefit enormously from this project – first through the direct foreign investment and second through the returns they make from it,” he adds.

“In my experience of dealing with governments in Africa, I’ve found that it’s good to have an equity partner to share the risk with you. We bring the technical and diamonds expertise to de-risk the project and they bring us political stability.”

Further to working closely with the government, Firestone has taken care to secure local contractors who understand how the country works. Combined with Firestone and Brown’s collective knowledge and experience of working in southern Africa, these relationships give the project greater stability and a competitive advantage.

Firestone’s mining lease at Liqhobong covers 390 hectares in total, the mine taking up approximately 8.5 of them for the Main Pipe and a further 0.8 for the Satellite Pipe.

The Updated DFS also strengthened the project’s economics, lifting the estimated US$ per carat from $100 to $107 (base case), or $156 (upside case) including anticipated revenue from large stones exceeding 100 carats. This changes the post-tax Net Present Value of the project to $379 million base case or $728 upside case; and the post-tax Internal Rate of Return to 30 per cent base case and 45 per cent upside case.

Brown explains that the update was necessitated by the hiatus between the original DFS in October 2012 and his joining the company in October 2013. This time around, Firestone factored in additional contingencies to further de-risk the project; one example being increasing the power budget from $10 million to $15 million, removing a third party from the arrangement and giving Firestone 100% of the power responsibilities. With the numbers now firmed up, he believes Liqhobong to be a “world class diamond project” capable of yielding great returns for shareholders.

“It has the high grade and a competitive cost of production,” he says.

“It makes for a compelling business case even excluding the large stones. Adding those will give us a very nice return on top of underlying assets.”

Taking it to the next level

Nine such large stones were found to have gone through the pilot plant last year, but unfortunately broken during the recovery process. The new Main Treatment Plant that Firestone is raising money to build has been specifically designed to recover such stones successfully, unlocking significant upside.

“The Pilot Plant was never capable of recovering the large stones. It was not designed to cater for that size of ore,” Brown explains.

“With the MTP, which is going to run at 500 tonnes per hour, we’ve increased the cut-off first crushing gap so that it will crush to a much larger size in the initial processing stage, allowing for the recovery of large stones as well as smaller ones.”

By the end of the last financial year, ending June 2013, the Pilot Plant had produced more than 325,000 carats, as well as provided confirmation of the quality, grade and size of the stones, including the presence of the large stones. It was closed at the end of October 2013 so that preparations for the MTP could begin. Once Firestone has raised the necessary funds, the MTP will be constructed over an 18 month period for commissioning to begin mid-2015.

“I have every confidence that we will raise the full amount of money and begin construction next year,” says Brown.

Meanwhile, Firestone’s BK11 diamond mine in Botswana remains on care and maintenance due to it failing to make the revenue Firestone had anticipated. The company expects to review the situation in the first quarter of 2014. An additional small exploration program remains on hold until Liqhobong is up and running. In 12 months’ time, Brown anticipates the construction of the MTP being well underway, ready for production to begin in 2016.

“I think it’ll be a fantastic feather in Firestone’s cap to deliver this project on time and on budget and I’d love to see it producing large stones for the 15-year period outlined in the current plan,” he says.

“Firestone is constantly looking at other opportunities but when Liqhobong is producing, we’ll have the capital and financial muscle to expand into the diamond industry where there are great opportunities. We’d like to be known as a company that returns actual money to its shareholders because I think that would put Firestone in a very unique position of giving people capital growth, a growth strategy around diamonds and a financial return they can enjoy.”

Brown also feels positive about the diamond market referring to “phenomenal” growth in demand from Asia and the “solid market” of the US. He believes the market can only get better in the run up to production restarting at Liqhobong. “I think with fewer projects coming online, there will be a supply and demand imbalance that plays into our hands when we enter the market,” he remarks, “and I have great faith that the industry and ourselves have a good many years ahead.”