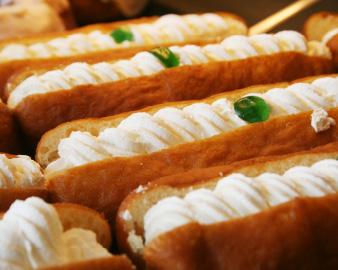 The bread and butter of South Africa by tabj.co.za

Good bread means good business, and as a prolific bakery in South Africa, Butterfield Bakery understands the intricacies of being a successful and delicious bakery with franchises all over the country.

For over ten years the company has been baking fresh breads and other baked goods for the South African market place. Butterfields opened its doors in Pretoria in 1996, and with the mouth-watering aroma of freshly baked goods, came customers.

In November 1996, the first Butterfield bakery was opened in Pretoria. Only a year after its inception, Johan Stapelberg and Kobus Oosthuizen saw the potential for more franchises of their popular bakery and decided to start opening other stores. From one popular bakery in  the company has massively increased over 80 stores all over South Africa and more throughout the African continent.

PRO and marketing manager Mia Bothma says, “It is a South African, home-grown concept that has been adapting and will keep adapting to the ever-changing economy and markets to ensure it keeps a competitive edge in this demanding industry.”

Butterfield Bakery is considered to be a bread expert and its main focus was on this staple in its early days, but since then the company has moved onto a number of different products. Bothma says, “In the last four to five years the focus has moved from only bread to also confectionary products. To accommodate this introduction, we are busy with a revamp where we install new imported counters which can stock and maintain ambient, hot and cold products.”

The company has expanded its range from eight products to twenty five core lines including school buns, Chelsea buns, cream cakes and donuts. Regardless of the variety in product, its bread, is still its best seller in most bakeries.

“The second bestselling line differs between the branches. Some sell a lot of cakes, others a lot of savoury products,” says Bothma.

Though Butterfields is a South African company, it has franchises all over the African continent including one in Swaziland, five in Botswana, three in Zambia and six in Nigeria.

To buy a franchise Bothma explains that the person must apply for a store via the website. She says, “The applicant must have a 40 per cent cash contribution to qualify. The applicant goes through some psychometric tests and should they pass it, they have an interview with key personnel of Butterfield.”

If and when the applicant passes the process, the company starts to plan the new site for franchising with the franchisee.

In a franchise environment it is very important that all stores have the same training, procedures and food quality. At Butterfield each new franchisee receives two weeks of valuable training prior to opening or takeover of the store and two weeks of full-time operational support after opening.

“The training includes theoretical training as well as practical training of how to run a Butterfield. We also have ad hoc training sessions for the network of franchisees,” says Bothma. “We have just completed a managers training course which consisted of budgeting, human recourses, marketing, hygiene and safety, customer care and theory of bread making.”

As far as health and safety standards go, Butterfields ensures that all franchises are up to code and of utmost cleanliness. Bothma says, “Our operational personnel visit the stores every six weeks or less where they assist with operational issues but also check the hygiene and safety standards to the store. Because we work with food, the government is very involved in making sure that all the stores are up to standard with regular visits from their officials.”

Interested in something different? Browse articles from our South African History Journal

Though most of Butterfield Bakery’s franchises are in South Africa it has plans for more expansion in Africa with stores opening in Botswana and Zambia and expanding to Angola and Zimbabwe.

Its biggest competitors in the bakery market are supermarkets. Bothma says, “Most of our stores are situated in centres where the anchor tenant is a big supermarket that bakes bread and confectionary products.”

Butterfield Institutional Bakery (BIB) is a partnership between businesses and Butterfield Empowerment Company to develop and maintain a sustainable enterprise for the supply of bread for its own use. Because of this procurement various empowerment and social upliftment objectives are achieved. Bothma says, “Currently, all three institutional bakeries are in partnership with mines. The mines build and maintain the bakeries as part of their social responsibility to towards the community.”

Bothma stresses that Butterfield isn’t just about delicious baked goods. “The Butterfield business system is not only about a fancy looking bakery and an impressive range of products. It is also not just about training the franchisee and its staff in the operational procedures of Butterfield. It is all about systems. The WEB enabled operational, admin and integrated accounting system is one of the sources of pride and one of the most important pieces of intellectual property developed and owned by Butterfield Support Centre.”

Butterfield boasts a world-class management information system, unlike any other system currently being used in both the franchising and baking industries. For this reason, Butterfield believes it is in sound existence in the competitive baking industry.

For the future, Butterfield has goals of opening more stores and will increase brand awareness via different forms of advertising such as taxi branding and advertisements. It also hopes to develop more products and increase profitability of its stores.

The company has already seen an immense amount of growth and will continue to with its delectable array of sweet and savoury treats sprouting all over South Africa and beyond. With its well organized franchise system and quality product, people all over Africa are sure to smell fresh baked bread wafting in from new Butterfield Bakeries.