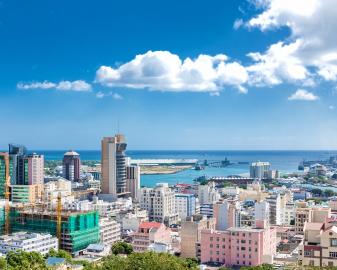 Stock Exchange of Mauritius was opened to foreign investors following the lifting of exchange control in 1994 and SEM became a public company in October 2008. Over the years the Exchange has seen a significant transformation of its operational, regulatory and technical framework to reflect the ever-changing standards of the stock market environment worldwide. Today, SEM says it has become one of the leading Exchanges in Africa and a member of the World Federation of Exchanges.

Committed to becoming a world class stock exchange, SEM positions itself as a service-driven and operationally reliable organisation with world-class trading and settlement capabilities, which incorporate and maintain the fundamental principles of market integrity, investor protection and efficient price discovery.

Located on a small idyllic island off the Southeast coast of the African continent in the Indian Ocean, just East of Madagascar, Mauritius is a multicultural haven with historical influences from Europe, Africa, India and China.

The country has been described by residents as a safe place to live and it has been recognised internationally for its respect for a peaceful government and rule of law. The island became independent in 1968 and has reportedly enjoyed political stability ever since, democratically electing a new leader and cabinet every five years.

Over the last 40 years, Mauritius is believed to have sustained an average GDP growth of five per cent and from its core industry around cultivation and sugarcane, it has diversified into an economy consisting of agro-business, manufacturing, financial services, tourism and property development, to name a few.

Emerging sectors include healthcare, life sciences, renewable energies as well as even filmmaking.

Not unlike SEM, Mauritius has been working hard to market its attractive investment climate and as such, this year it was recognised as the top business friendly destination in Africa, as well as number 23 globally, according to the World Bank Doing Business Survey.

The Official Market started its operations in 1989 with five listed companies and a market capitalisation of nearly US$92 million. Currently, there are 42 companies listed on the Official Market representing a market capitalisation of nearly US$6 billion as of March 29, with the top three companies including The Mauritius Commercial Bank Limited, Vivo Energy Mauritius Limited and ENL Land Limited.

The DEM was been launched in August 2006 and there are presently 47 companies listed on this market with a market capitalisation of nearly US$ 1.4 billion, as reported in March, with Margarine Industries Limited, ABC Motors Co Limited and United Bus Service Limited rounding off the top.

According to the Exchange, the DEM is a market designed for small-to-medium sized enterprises as well as recently launched companies that can prove a sound business plan and demonstrate a good growth potential.

“It is meant for companies wishing to avail themselves of the advantages and facilities provided by an organised and regulated market to raise capital to fund their future growth, improve liquidity in their shares, obtain an objective market valuation of their shares and enhance their overall corporate image,” said the company.

As a foreign investor, you do not need approval to trade shares, says SEM, unless investment is for the purpose of legal or management control of a Mauritian company or for the holding of more than 15 per cent in a sugar company. Foreign investors benefit from numerous incentives such as revenue on sale of shares can be freely repatriated and there are no withholding tax on dividends and no tax on capital gains

Since its inception, SEM has been going through a tremendous amount of growth and its efforts to establish itself as a world-class organisation have not gone unnoticed.

In September, SEM won the “Most Innovative African Stock Exchange of the Year” award – for the second year in a row – at the Institutional Investment Summit and Index Series Awards organised by Africa Investor, a leading international research and communication group, in association with the New York Stock Exchange Euronext. It beat out eight tough competitors, including the Johannesburg Stock Exchange, Egyptian Exchange, Nairobi Stock Exchange and Ghana Stock Exchange.

The award was given on the basis of a number of criteria, including initiatives implemented by the Exchange to embrace new areas of development, programmes in place to enhance the services it provides to its key stakeholders and compliance of the Exchange’s regulatory and operational set up with international standards.

“This Award for the second consecutive year comes as a recognition of the numerous initiatives taken recently by the SEM, with the active support of the Ministry of Finance, the FSC, the BOI and other private sector operators to scale up its activities and move up the value-chain of products and services it offers,” said Gaetan Lan Hun Kuen, Chairman of the SEM. “In spite of the very difficult market environment, the SEM has been actively pursuing an internationalisation strategy to position itself as an attractive listing, trading and capital-raising platform for Global funds, Global business companies, specialist-debt products, and African-based ventures.”

In December, SEM’s chief executive, Sunil Benimadhu, was also re-elected as chairperson of the African Securities Exchanges Association (ASEA) for a term of two years at the 16th ASEA annual general meeting in Cairo, Egypt.

The Exchange’s dedication to remaining globally competitive inspired the company, in 2001, to launch SEM’s Automated Trading System (SEMATS). The company describes it as a state-of-the-art electronic trading system built on third generation technology.

“SEMATS puts an end to traditional trading patterns which have typified the Stock Exchange of Mauritius since its inception,” said the company. “Trading in securities is conducted through dedicated trading workstations located at intermediate dealers and linked by communication lines to the SEM trading engine.”

SEM is also connected live to renowned global vendors including Interactive Data, Financial Times, Factset and Inet Bridge and is one of the few exchanges in Africa to be connected to Bloomberg and Thomson Reuters on a real-time basis. All this enables retail and institutional investors worldwide to follow SEM’s market on a real-time basis

With globally-respected leadership, a commitment to evolve with industry trends, as well as offer attractive listings, SEM is looking ahead while maintaining its goals to move from a domestic-equity-focused Exchange to a multi-product-internationally-focused Exchange.

“In the years to come, the split of listings on SEM is expected to overwhelmingly consist of international funds, international issuers, specialised debt instruments, Africa-based ventures, African-focused Exchange-traded funds and other structured products. The number of issuers, players and investors in our market will increase over time, increasing the breadth and depth of our market in Mauritius, and thereby also bringing a meaningful contribution to the integration of the Mauritius financial services sector within the international financial system.”