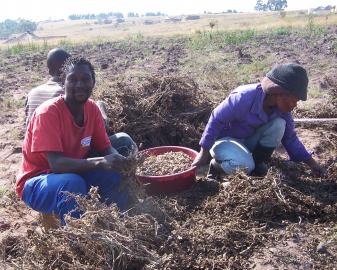 South Africa as a hub for African Investment

Musa Capital is a successful boutique investment bank operating out of South Africa. The company may have roots in New York City and Boston, but its owners all share a passion for Africa and strong belief that South Africa is the perfect place to work from when investing in the continent.

Started in 1995, Musa Capital was founded by four American partners. These co-founders have a 25-year-old relationship and all went to school in Boston with two attending Boston University, one at MIT and one at Harvard University.

In its early days, Musa Capital established a fund (Fund I) principally sponsored by HRH Prince Al-Waleed of Kingdom Holdings in Saudi Arabia. The fund targeted high growth, undervalued African assets across a sector base including telecoms, financial services, agri-processing and property and did overwhelmingly well for the company.

The partners worked out of New York City for a number of years – “ex-Wall Street guys with a whole gamut of skills,” as chief executive officer William Jimerson succinctly put it – but their shared passion for Africa eventually pushed them to relocate in 2003

After a long debate the group settled on Sandton, South Africa, “the New York of Africa”, as its primary destination and, now, in its 18th year Musa Capital is taking advantage of being in a hub of African investment with people all across the continent, including Zambia, Tanzania, Nigeria and Ghana.

In 2008, Musa established the Musa Kubu Fund (Fund II) of $85 million, which included South Africa-based high-net worth individuals along with a local institution representing a community of 30,000 previously disadvantaged people living in the North West Province. This fund is now nearly fully invested and the impact it has had is noteworthy: 1,000 new jobs across the continent and another 600 small-to-medium businesses have received investment.

“Small-to-medium businesses are the catalyst for growth,” explains Jimerson.

Musa Capital is built around two divisions, with the first offering services in an advisory role. In this division, the company primarily works with corporate or state-owned investors from Africa and around the world. This side of the business is focused heavily on fundraising for various projects including business acquisitions, or project finance. Sometimes it is a global investor looking to make an investment in the African continent with the majority of these transactions involving private companies.

The other division of the business is private equity. In this section, the company helps to manage assets and private equity funds for a variety of local and global investors. Musa Capital will work under its own mandate to make direct investments in unlisted businesses throughout Africa.

The advisory side of the business sees clients at an average size of about US$50 million. However the company has had projects that have gone as high as a US$3 billion project to fund the construction of a pipeline in South Sudan. When it comes to the private equity aspect of the business, the focus is on small-to-mid sized businesses.

Jimerson emphasizes that although the company focus is on the financials, Musa Capital always seeks to make an impact that goes beyond that.

“We are looking at a socio-economic development perspective,” says Jimerson. “The obvious things like job creation, and skill development. But more frankly in terms of really helping to build African businesses and assuring that it’s done using African talent on the continent.”

South Africa is positioned perfectly to allow investors to gain access to companies and industries that reach across the continent, while also offering the infrastructure needed to conduct business.

An investor looking for exposure in Kenya, for example, can invest in South African Breweries which distributes in Kenya as well. Investors can operate in a comfortable area, with a good quality of living and easy access to the necessary financial services. “South Africa is Africa for beginners,” says Jimerson, with a chuckle.

When it comes to the risk of investment in South Africa, Jimerson says it is no different than the rest of the world in terms of the categories of risk. Whether you are in North America, Europe or Africa, political risk will always be a large player. The only way that Africa is different is in the amount of information and analysis that exists about its political risk. In the U.S. there is a wealth of available information about the political status, and the economic environment, which leaves investors with lots of data to use when making decisions.

In Africa it is tough to measure, understand, and plan around political risk. “There is a lack of information, a lack of understanding. So the risk, here, for an investor, the challenge is going to also be the biggest opportunity,” says Jimerson.

The way companies like Musa Capital minimise this risk is by locating themselves on the ground in Africa. By working out of South Africa the company can be much better connected with the political environment and have more time to react to instability.

Jimerson points to Telecom giant MTN as an example. MTN invested a large sum of money in an operating license for Nigeria, leaving many analysts calling it a mistake. However, the growth MTN has seen in Nigeria is considered one of the fastest growing mobile telecom markets in the world. In the midst of big risk is the chance of big return.

Musa is working on few exciting projects across its divisions. On the advisory side, Musa finished raising $60 million over 18 months to fund a facility for the agricultural bank in Zimbabwe. This project has been challenging and rewarding at the same time, says Jimerson. The challenges have stemmed from the fact that Zimbabwe is on the sanctions list along with any state-owned businesses. However about a year and a half ago South Africa signed a bilateral agreement with Zimbabwe, and Musa Capital is proud that this project was one of the first transactions made under the new agreement.

Another big advisory project is in Bayelsa, Nigeria’s largest oil producing state. Musa Capital has been working with the government of Bayelsa to create invaluable investment links and get projects started around constructing basic infrastructure around the region, including building an airport, hospitals, hotels and roads.

The Bayelsa Investment Forum that happened last October, organized by Musa Captial, marked a turning point in African collaboration, with Bayelsa State pro-actively looking for intra-continental rather than extra-continental co-operation and focusing on commercial rather than purely political commitment, says Musa on its website.

As for the private equity side of the business, Jimerson says it holds lots of promise for Musa Capital right now, financially as well as in terms of the company focus on socio-economic development. The company is currently investing in consumer facing sectors, like food and retail, to help encourage the development of small businesses. One of these food businesses went from a 35 million rand per fiscal year to a 700 million rand business in only four years. A by-product of these investments has been Musa Capital’s involvement in a school feeding program.

Musa Capital is always looking for ways to create these kinds of symbiotic investments where one side of the investment supports the other. Not only is this project financially rewarding, says Jimerson, it is spiritually rewarding as well to know that the company has helped feed 1.3 million children a day in South Africa.

Musa Capital has a solid history performance, smart investments, and passion. The company is dedicated to supporting business in Africa and works hard to employ people from the community and to invest money back into local businesses. The company is looking forward to aggressive fundraising to continue growth across the continent and is currently working on its third fund with the goal of raising $300 million. Jimerson is hoping to close the fund in the next six to nine months and begin investing.

He says: “For us, the opportunity in Africa far exceeds the amount of resources available for it.”