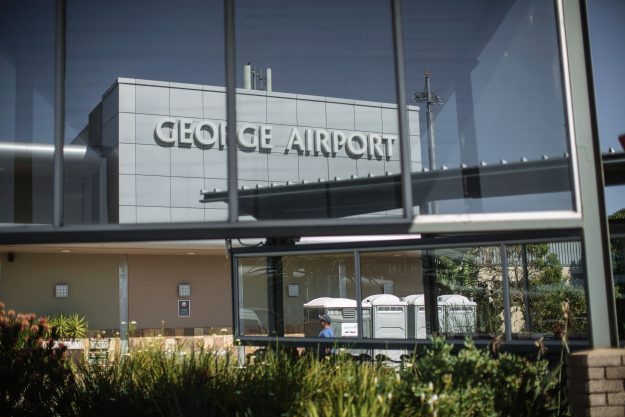 George Airport, is one of the fastest growing in South Africa. Located just 10km from George’s town centre, the airport provides domestic flights for South Africa. George Airport is geared up to efficiently handling the high volumes of passengers and luggage that generated by the booming tourism currently being experienced in the region. Even though George Airport is relatively small, it buzzes with activity, receiving flights from several airlines including, South African Airways, Kulula, Comair and 1-Time. Around 250,000 passengers pass through its doors each year, with the airport also handling cargo, and ensuring that seafood, flowers and other products manufactured or grown in the area get to their destinations safely and without delay. Recent upgrades will enable it to consistently provide international standards while still enjoying the feel, intimacy and joy of a community airport.

The airport is owned and operated by Airports Company South Africa Limited (ACSA), formed in 1993 as a public company. Although ACSA is majority owned by the South African Government, through the Department of Transport, the company is legally and financially autonomous and operates under commercial law. ACSA was formed to own and operate nine principal South African airports, including George Airport. Provided is world class, secure infrastructure for airlines to transport people and goods, ACSA extends its responsibilities to include the promotion of tourism, the facilitation of economic growth and job creation, and protection of the environment.
In recent years ACSA has completed ambitious infrastructure capacity development and for the past nine years, service standards have been benchmarked through the Airports Council International’s (ACI), Airport Service Quality Programme. There are currently 180 airports around the world taking part in this programme. To date, ACSA airports have won 20 achievement awards for passenger satisfaction.

The George Airport, was formally known as P.W. Botha Airport, named after the state president who resided for much of his life in the area. It is among the jewels of the Garden Route, which stretches across of the South-Eastern coast of South Africa. The Garden Route, enjoys an enviable reputation for being a fashionable holiday destination and home to many of South Africa’s most affluent residents. Commercial and residential development in George, and its surrounds is practically unsurpassed in South Africa.
George Airport is able to provide a world class customer service for visitors choosing to fly directly to the Garden Route, rather than fly to Cape Town or Port Elizabeth and take road transport to their destination. The excellently resourced airport in terms of shopping, restaurants, and passenger facilities, lies between Port Elizabeth and Cape Town. Year on year it successfully serves the city which is not only a popular holiday and sports destination but the administrative and commercial hub of the Garden Route. With its awe-inspiring mountains, pristine beaches and dense forests, it is a major tourist attraction, drawing visits from hundreds of thousands of domestic and international customers.

George Airport, achieved ISO14001 certification in June 2011, and through doing so demonstrated its commitment to reducing waste and recycling materials, where appropriate. ISO 14001 certification sets out the criteria for a sustainable environmental system. The requirements of ISO14001 are an integral part of the European Union’s Eco-Management and Audit System (EMAS). The standard provides the framework for organisations to demonstrate their responsibility to the environment by reducing harmful effects on the environment and, providing evidence of continual improvement of Environmental Management.

George airport now handles over 600,000 passengers each year. The ever increasing popularity of the area as a tourist destination is expected to boost traffic even further during the coming year. George, nestles between the Outeniqua Pass and the stunning beaches of the Southern Cape. It is an incredibly picturesque destination, boasting a sophisticated infrastructure with banks, conference facilities, businesses and shopping chains including the newly completed Garden Route Shopping Centre. Outstanding transport and sporting facilities, also feature in George, while it successfully retains the small town atmosphere that residents of the area and the thousands of regular visitors love. George Airport is surrounded by an oceanic climate, with warm summers, and mild to chilly winters. It is a region with one of the highest annual rainfall in South Africa. Most of the rainfall will occur in the winter and spring months, brought by the humid sea winds from the Indian Ocean. Golf enthusiasts from around the world and across South Africa, flock to George, via its airport, to indulge their love of the variety of world class golf courses in the area. A number of high-profile golf tournaments take place at the luxury golfing estates on the Garden Route.

George Airport looks set to continue to enjoy steady growth over the next 12 months as ACSA investment pays off and drives up the numbers of domestic and international users to new record levels. The airport has an unquestionably vital role to play in the region’s tourist economy. It also provides a crucial service in being a national distribution hub for a range of cargo including to name a few, flowers, fish, oysters, herbs and ferns. The unwavering commitment to service and efficiency, demonstrated by the much loved airport has won it the South African Airport of the Year award six times – 2014 could well be its year again.