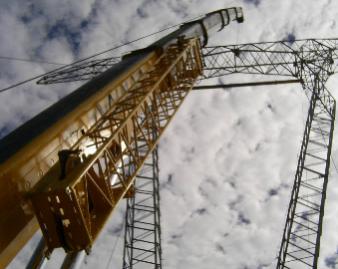 Cranking out business in South Africa – The African Business Journal

Anglo started in 1992, but its first crane was only purchased in 1994. Since then the company has progressively grown into 10 branches nationally in South Africa.
The company prides itself on its strong worth ethic and has always been a family run business since its inception with fathers and sons working together in unison. Herman van Staden, the managing director of Anglo-V3 says, “Originally the company, which began as V3 Construction (Pty) Ltd, was started by my dad, Johan van Staden Sr. My brother and I joined in 1995 and 1996, respectively, and contributed to growing the company.

“In 1999 we brought the company called Anglo Crane Hire & Sales. Together with V3, the two companies ran parallel within the same ownership. We bought the premises in Johannesburg in 2007 and decided to merge the companies into one.”

That merging of two companies has developed into the successful business it is today.
In October 2008 Investec Principal Investments became a 60 per cent shareholder in Anglo-V3. In its early stages, V3 was in the construction industry and then started specializing in mobile cranes, which is how it runs today. Currently, Anglo-V3 has a strong staff of 180 which includes permanent employees and qualified subcontractors.

With eleven offices in South Africa, the company successfully opened its Gauteng branch in Halfway House, Midrand, which has become its corporate head office.
Its other locations include Newcastle, Richards Bay, Welkom, Bloemfontein, Saldanha, Mossel Bay, Rustenburg, Orkney, Evander/Secunda and Port Elizabeth. The company is active in Cape Town, though it doesn’t have a permanent branch in this location as of yet. Regardless, the company has seen immense expansion since its beginnings and hopes to develop throughout Africa and beyond.

“We plan on getting exposure in Mozambique, Botswana and Zimbabwe. A lot of our clients are in the mining sector and we are trying to get more and more clientele in the petrochemicals sector,” says van Staden.

Though the majority of plans are based in South Africa and Africa as it is logistically easier according to van Staden, the company has long-term endeavors to expand internationally. He said, “We are looking for South Africa to spread our wings a bit more and we hope to grow accordingly.”

Anglo-V3 specializes in specialized transport, mobile crane hire and associated services, including CAD-rigging studies. The company presently has a fleet of 99 state-of-the-art mobile cranes that are fully hydraulic and have wide arrange of 8-550 ton capacity. Anglo recognizes that new state of the art equipment is key in doing their business well and they have upgraded and replaced old equipment since 2003. This ensures quality and consistency. The company has purchased cranes that are worth over R165million to replace old machinery. As of late, recent purchases include a 100 ton Grove GMK4100L and two 170 ton Grove GMK5170 All Terrain cranes. Anglo-V3 services a variety of industries, including companies involved in mining, petrochemical, industrial, construction, mechanical, structural, civil or electrical authorities.

In a business like Anglo, where safety is of utmost importance, there are high standards to make sure that cranes are maintained and operators are tested and certified regularly. Lifting Machine Inspectors, LMI’s are ECSA registered which means that their cranes are load tested and accredited. Anglo-V3 is a registered LMI. The company also provides extensive training about rigging including a 3-D Computer Aided Design (CAD) presentations to prepare for unforeseen problems during lifts.

Anglo-V3 is a major competitor in the crane hire industry. They not only standout aesthetically, with bright yellow machines, but their quality work in the market place makes them visible in their own right. “Our availability and quality of service is important  and makes us just as competitive as the next one. But, it’s not always about the quality of services that you supply. The fact that we work for mines and have contracts with all of them shows we are up to the standard that is required and that we are committed to new legislation,” says van Staden.

Van Staden is adamant that their state-of-the-art cranes sell themselves. He said, “They work accordingly and are maintained really well. We are reliable and safe to work with.”

Fleet wise, Anglo-V3 is one of the top three companies in South Africa and van Staden notes their large potential for even more growth. “We are a very healthy company with financial backing. With more upgrading surely there is opportunity to grow going forward,” he said.

The family-run business’ humble beginnings have evolved into a merger of two strong companies and transitioned into what the competitive crane hire company is today. With hard work, a quality fleet, determination and a competitive business plan and merger, Anglo-V3 has steadily become one of the top crane hire companies in South Africa with potential for steady, long-term growth.