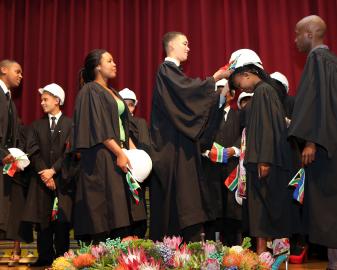 Go for Gold is an award-winning not-for-profit organisation focused on providing disadvantaged young people with exceptional opportunities to develop technical skills, build confidence and receive hands-on training in preparation for a career in the construction industry.

Acting as a bridge between the education and construction sector for over 13 years, Go for Gold has been unanimously embraced by the industry in the Western Cape and now has partnerships with a number of notable companies, including Neil Muller Construction (NMC), Haw and Inglis, Murray and Roberts, NMC Pty Limited, Strata Civils and Power Group, to name a few.

The story behind Go for Gold is a unique one, yet echoes the motivations behind why many companies are started in the first place – necessity.

Post-Apartheid and into the new democracy in South Africa, many companies attempted to address the injustices in the past by hiring on young people from disadvantaged communities. The problem with this type of reactionary hiring was that many token appointments and mistakes were made in an effort to force the sector to represent the population, without much regard for whether people were truly able to do the job.

In 1999, a human resources director for a building company, Shaun Webber, decided to dig into the root of the problem, which quickly revealed itself to be that these students who wanted to work in construction-related fields unfortunately were not suitably qualified due to poor academic results in mathematics and sciences.

Webber discussed this with some officials in the Western Cape education department and they created a model that would provide specialised educational training, work experience in the industry as well as sponsorships for these students to cover their tuition costs as they continued in their tertiary studies.

Until 2004, the staff at Go for Gold worked on perfecting the model and by 2005 they not only had numerous industry partners, but had become an independent NGO that the construction and engineering industry were championing as their own.

“I came into it as a life skills and communication tutor and besides the lack of science and math, there was more to it,” explains Patti Bruyns, executive director at Go for Gold. “Low self-esteem, absence of role models in their communities, lack of hope in a skilled future, lack of confidence, lack of motivation and we wanted to work with them to have a positive effect on other aspects they wanted to achieve as well. The communication portion taught them to communicate more effectively in English, but also more confidently. This is what distinguished our program from many others.”

In order to have the most impact, Bruyns says the students are recruited in the last two years of high school. But they have to stick to strict standards, like developing strong work ethics and committing to attendance, all of which are factors that companies expect when these students make their ways into the workforce

When they begin Phase 1 of the training, the students are transported after school to another campus to further their studies in math and science, and they are also taught basic computer skills and, perhaps most importantly, life skills. They continue with this training four times a week, until the end of their Grade 12 year when they are interviewed by the participating construction companies for an internship placement. Thus begins Phase 2.

This second phase is the gap year where the students “go to work” to experience day-to-day life in their company placements. While in Phase 2, the students have the opportunity to not only receive hands-on training within the industry, but also get to experience the different aspects of the job while being circulated within the company. On Saturdays, they are continuing with their bridging courses and life skills training.

“We depend on these companies to employ these young people who are completely inexperienced and untrained,” says Bruyns. “We depend on them to employ them for a year and invest hours in training them. Companies are prepared to do this and are taking these young people on because they know that coming from Go for Gold, this is a worthwhile investment.”

Phase 3 comes next, and this is when the students attend a tertiary institution to study what they’ve selected to do. Companies that have taken on students in the second phase and have decided to invest in their futures will end up sponsoring their tuitions. However, there are also bursaries to help the students pay for their schooling, through government grants and the Go for Gold bursary fund launched on the initiative of the Master Builders Association in the Western Cape.

The final phase is when the students find full-time employment in the industry, as well as remain in close touch with Go for Gold to mentor upcoming graduates.

Past students have gone on to become Civil Engineers, Quantity Surveyors, Construction Managers, Carpenters, Health and Safety officers, Electricians, Draftsmen, and this year Go for Gold got its first Architecture student. As long as it’s within the industry, Go for Gold is there to guide each student along their way.

Bruyns believes Go for Gold’s model will continue to remain successful not only because they can assure their students of a particular journey since they are so industry focused, but also because of their culture of instilling a sense of self-worth.

“One of our students was asked [by a peer] to stay absent one day and they said, ‘no, this is where I matter. This is where people care what I have to say and how I feel’,” explains Bruyns, describing the type of positive impact programmes such as these can have on these communities.

In fact, there is such pride in being part of Go for Gold that even the people who are contracted to transport the children between classes and cater meals for them come away with a sense they are doing this for their children.

Go for Gold hopes to expand its successful model into the rural areas of the Western Cape to offer the same advantages to disadvantaged youth in those areas. The organisation is also discussing steps to expand its footprint beyond the province and into the rest of South Africa.

“We give them hope for the future. In many cases they’re the first in their families to reach Grade 12; first to go for tertiary education,” says Bruyns. “They walk tall and proud at school when they have been selected to be part of Go for Gold; in their communities as well. We feel an important part of what we do is their personal growth and development and that’s difficult to measure. [But when] they describe what the program means to them and how much they’ve changed in a given period, that’s honestly what’s most rewarding.”