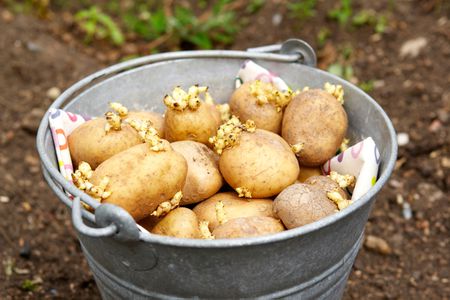 The Benchmark in Seed Potatoes

Fifty years ago, a farmer named Theo Cook travelled back from Scotland to South Africa. With him, he had a white, smooth potato called the Up-to-Date, which is indigenous to the United Kingdom. He planted trials of the seed potato under the dry land conditions in Christiana, an agricultural town in the North West Province of South Africa. The results were excellent and the seed performed well in other parts of the country.

The following year, Cook and his neighbour Chris Callender-Easby planted again and the yield was good. Again the seed did well. The two friends decided to market their seed potatoes. So in 1964, three years after Cook returned from Scotland, they became two of the founding members of Wes Vrystaat Aartappel Moerkwekers.

“We have exclusive contracts with two key overseas seed companies, HZPC from Holland and IPM from Ireland,” says Gerhard Posthumus, Managing Director, WVAMK. “We bring varieties in from these companies, trial them and develop and establish them in the markets.

“This is a very long and costly process in establishing a variety. It can take about eight years. Our focus is on variety development, production, as well as marketing our seed.”
Seed potatoes are essentially a part of a healthy potato. They are used to plant and to produce a crop of potatoes. Approximately 45, 000 tons of seed are produced yearly and marketed throughout South Africa as well as exported to various countries.

All seeds grown by WVAMK are strictly inspected and certified under the guidelines of the ‘South Africa Potato Seed Certification Service’. WVAMK is focused on developing a variety of seed potatoes which include the Fabula, Rodeo and the Mondial, which holds more than a 60 per cent market share in the industry. Posthumus says that the Sifra seed potato is gaining popularity and the Savanna and Panamera are ones to watch.

“Wes Vrystaat Aartappel Moerkwekers is a farmer owned business with a closed system of seed sources,” explains Posthumus. “All seed produced in our system start from mini tubers that are produced by our sister company Rascal Seed Research Laboratories (Pty) Ltd. This minimises our risk in terms of foreign diseases. We multiply our seed just three times and have our own dedicated marketing team that promote and market our seed.”

The region where WVAMK is based is extremely hot and dry in the summer. In the winter, temperatures fall well below the freezing point for several months at a time. With adequate water irrigation and highly suitable soils, WVAMK has been able to propagate their potato seed. By partnering with growers throughout South Africa, they’ve also been able to provide seeds year round.

“We pride ourselves in our ability to deliver quality seed right on time for twelve months of the year. It’s a basic principle that we put a lot of emphasis on to satisfy our clients,” he says. “Potatoes being vegetative propagating material, it is quite difficult to supply quality, plant ready seed for twelve months of the year.”
Increasing their competitive edge, WVAMK has a state of the art cold storage facility that stores up to 50% of their seed which enables them to prolong their marketing season.

“Potatoes are a specialist product and the growers become bigger and stronger every year,” he says. “This makes the entry level for new growers very high and therefore we see fewer new entries in the industry.

“Potatoes are one of the most important crops when it comes to ability to feed the world. African governments place bigger emphasis on promoting potatoes in the food chain. Exports therefore are becoming more important.”

It’s evident that Wes Vrystaat Aartappel Moerkwekers has established itself as a major player in the seed industry in Southern Africa and looking forward, WVAMK will undoubtedly achieve its goal of achieving shares in all the different segments of the seed market.