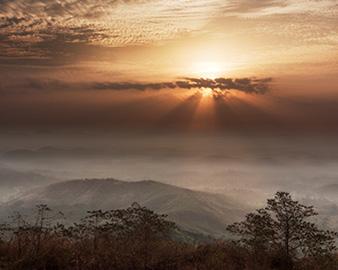 Focus and determination
Continuing progress on the world-class Tonkolili project has made London-listed mining company African Minerals the largest exporter of iron ore in West Africa and this is only the beginning.

Things move quickly under the competent management of African Minerals Limited. We last spoke to the London-headquartered company in July 2013, slap-bang in the middle of what became a defining year for the company. Last year saw AML complete Africa’s fastest major mine development at the Tonkolili iron ore mine in Sierra Leone, as well as begin ramping up its production to 20 million tonnes per annum (Mtpa). The company also produced 13.1Mt of iron ore and exported 12.1Mt, making it the largest contributor to Sierra Leone GDP.

Amidst all this fast-tracked development and production, AML also appointed a new CEO. Following Keith Caldera’s resignation in August, the company’s Board immediately selected director Bernard Pryor to take his place, confident that they had the ideal candidate.

Bernie came to us as a non-executive director, but when we looked around for a person to replace Keith he was the natural replacement, comments Mike Jones, Head of Corporate Development and Investor Relations at AML.

He’s been everywhere, he’s done it all; amongst other things he’s been a mine manager, a contractor, a constructor, a public market executive, a major public company executive and a mergers and acquisitions entrepreneur. His experience is completely of a kin to that which his predecessor had, but with the added advantage of having first-hand experience of running integrated mines, railways and ports in iron ore.

The Board asked Pryor to focus completely on just three near-term goals. They were to ramp up production to 20Mt; to achieve a cash cost of $30 per tonne; and to put flesh on the bones of Phase 2 and commence its construction, says Jones. The focus was entirely on Tonkolili; and that’s absolutely still the case.

Explore our selection of articles from Business Magazines in South Africa

Success in the face of adversity

These positive results could have been far better, however, had several issues not arisen prior to the wet season that disrupted the excellent progress made up to that point. Jones recalls the successes made within 2013’s early months with pride.

We did very well ramping up to what was essentially a 14Mt run rate in February 2013, with the single existing wagon dumper we had at the time,â€ he remarks. We then got the second wagon dumper installed and commissioned in April, which allowed us to achieve that illustrative 20Mt run rate in May and June, where we got 10 vessels out in the space of 30 days.

But you have to demonstrate the ability to achieve that rate day-in, day-out, he continues, œand unfortunately it was at that point that we lost our principal conveyor belt and began having issues with our trans-shipping vessels.

The 5.8km-long CV02 conveyor belt suffered a devastating lateral split that would take a while to be repaired. Around the same time, AML’s four trans-shipping vessels began running into problems one after the other, severely limiting the amount of material handling AML could do throughout the wet season. It wasn’t until January 2014 that AML’s operation was back running at proper capacity, with two wagon dumpers, the principal conveyor belt in one piece and four trans-shippers running.

Only now are we in a position to prove that we’re capable of sustaining a 20Mt run rate, which means peaking at even higher levels, says Jones. Once we have that, our cash costs will decrease to the targeted $30 per tonne mark.

AML has its hands full as it begins Q2 of 2014, with several other tasks running alongside the production ramp up.

A drilling programme begun in Q4 2013 targeted to upgrade the Tonkolili resource is ongoing, with an update expected within the next couple of months. In the meantime, AML is growing its infrastructure capacity with the construction of a third large DSO processing plant, set to be commissioned and ramped up during the second quarter. Supplementing the existing 10-12Mtpa 1B and 6-8Mtpa 1D plants, the new 9Mtpa 1G plant will raise AMLâ€™s overall processing capability to more than 25Mtpa.

In the longer term, AML wants to expand production to 25Mtpa and to move from producing DSO to producing a high-value concentrate. To help it achieve this, it commissioned Hatch (South Africa) and SNC Lavalin (Canada) to find cost-effective ways of maximising the real export capability of AML’s existing port and rail infrastructure. The two company’s findings confirmed that AML’s existing facilities will be able to support an increased production level of 25Mtpa with relatively little capital investment.

Part of this investment will be in implementing a number of technological interventions to make it possible to export more product during the wet season. For example, the first is to polymerise the iron fines so that their flow moisture point the percentage of moisture that causes them to liquefy is increased. This in turn raises the transportable moisture limit: the percentage of moisture above which they become unsafe to ship.

Polymerization will allow us to ship group A cargoes where they would otherwise exceed the unpolymerised transportable moisture limit, allowing us to transport fines deeper into the wet season, Jones explains.

A second intervention is to de-slime and re-screen the iron fines, so that the coarse size fraction measuring above 2mm, are separated from the smaller size fraction. This will allow the larger size fraction, termed œintermediate lump to be categorised as group C cargo, which, with no flow moisture point, can be transported at any time, even at the height of the wet season.

After implementing these interventions, we’re going to have six different products: three group As and three group Cs, which will give us a great deal of flexibility for managing exports within the wet season this year, says Jones.

Our polymer test work went very well and we hope to have the polymerisation circuit in place before the height of the wet season. The costs of implementing polymerisation and re-screening are not significant at all; if we can get one extra vessel out during the wet season, the interventions will more than pay for themselves.

The latter end of 2013 saw AML make announcements on two investment agreements with project partners. Tianjin Materials and Equipment Group Corporation (Tewoo) signed an MOU in late September to invest $990 million in Tonkolili in exchange for 10% of the project. The Chinese steel trading company received and approved two trial shipments in Q4 2013, and is currently completing its due diligence.

At the end of December, AML’s existing off-take agreement with Shandong Iron and Steel Group (SISG) was amended so as to be directly linked to Tonkolili’s annual production capacity. Under the amended terms, SISG will receive 6.5Mtpa in 2014 and 7Mtpa once project capacity has reached 25Mtpa. The amount will then continue to increase pro-rata, up to 10Mtpa once the project has reached nominal 35Mtpa capacity.

While AML’s foremost goal is ramping up production to that sustainable 20Mt run rate and $30m/t cash cost, it is simultaneously laying the foundations for Phase 2 that will begin to exploit the 1.1 billion-tonne saprolite portion of the Tonkolili resource. AML appointed Ausenco as engineer for the Front End Engineering Design work of Phase 2 in February 2014 and expects the plans to be drawn up by mid-year.

After that we can start to purchase the long lead time items and mobilise the bulk earth moving equipment to site in Q4, for the end of the wet season, Jones explains.
We’ll then be in a position to build the first of our large concentrators through 2015 so that it’s in production in 2016, producing a higher-value product at a higher tonnage.

AML has got 2014 off to a great start, having produced 5.3Mt of saleable DSO product and exported 4.6Mt of it in the first quarter alone. These figures establish AML as the largest exporter of iron ore in West Africa, the second largest in Africa and within the global top 10.

The company’s forecast sale guidance for 2014 is 16-18Mt, with C1 cash costs for the full year expected to average $34-36 per tonne. Jones says the company is very confident in its finances and stability.

The fact that we’re hitting the blocks with our monthly tonnage production means we’re getting a strong cash inflow from operations month after month, making our balance sheet more manageable, he says.

We’ve been 100% focused from the start on building the Tonkolili iron ore project into the cash cow it has potential to become, and we can now see that strategy beginning to pay off. That is the foundation of all we’ve achieved so far, and of everything we’ll do from here on in.