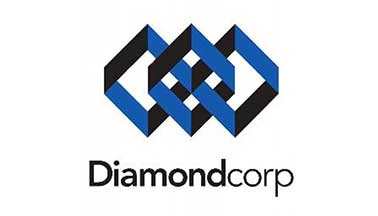 Polishing up the past

British miner DiamondCorp is burying underneath a historic open-pit diamond mine in the Free State Province of South Africa to build a new underground mine with a significantly higher grade.

The Lace Diamond Mine, located approximately 200km southwest of Johannesburg and near the town of Kroonstad in Free State Province, dates back to 1901. It was operated first as an open pit by the Dale-Lace family, and then by the Crown Diamond Mining and Exploration Company Limited, until it was suspended in 1931 and bought by De Beers in 1939. It then entered a very long hiatus: one exceeding 70 years. It was more than a century after the first shovel that the project gained its second wind – via a corporate finance house in London.

Stockbroker Paul Loudon was Head of Equities at Loeb Aron & Company when the Lace Project went back on the market in 2005. “We’d known about the Lace Project for quite some time and been waiting for it to become available,” he recalls.

“As one of the very few potentially long-life kimberlite deposits that had not been touched since the 1930s, it was in a unique and attractive geopolitical position.”

The reason Lace had lain dormant until then was because De Beers had bought it with the intention to keep it shut, to help it control global diamond supply and cement its market dominance. “De Beers didn’t buy every shut down diamond mine; they bought only those they knew were going to cause them a problem when the diamond price recovered,” says Loudon.

Back then, owning mineral rights in South Africa came with no obligation to mine. This meant De Beers was able to hold the mineral rights to the Lace Project for decades and simply allow it to flood. That changed on 1 May 2004, when new legislation was introduced to prevent mining companies from sitting on mineral rights and doing nothing with them.

“De Beers decided to divest these assets and keep Voorspoed, which is about 9km away and larger: 8.5km compared with Lace’s 2.75km,” Loudon explains. “And when the Lace project came through Loeb Aron’s front door, we liked it so much we created DiamondCorp to take it on. I joined full time to run the company in 2005.”

Prior to the flooding of the project under De Beers, the mine’s initial operators had dug an open pit 100m deep, gone about 220m underground and extracted approximately 4Mt of kimberlite. All of which meant DiamondCorp’s move to take over the running of the mine was not straightforward, even before the global financial crisis arrived and made things difficult.

“When we got control of the project, in addition to an estimated 33Mt of remaining resource, it also comprised a big hole full of water and about 4Mt of tailings from the old operation, running at approximately 16 carats per 100 tonnes,” Loudon explains.

“So we took a two-phase approach. Phase one was that we would build a plant for the life of the mine and start retreating those tailings. We built that plant in 2008 and had started treating the tailings, when the world fell apart in the GFC. Diamond prices crashed for the same reason they crashed in 1931 and those tailings retreatments became uneconomic for us.

“So we shut it down at the start of 2009, and then just continued on with the exploration programme, which was to get a bulk test out from the kimberlite,” he continues.

“This was a challenge, as it required us to sink a decline tunnel that would allow us to get trucks underneath the old mine workings to 260m deep. By the end of 2011, we had completed that bulk test and demonstrated that the grade in the upper levels of the project was exactly as had been predicted by microdiamond analysis of drill core at 24-26 cpht and the carat value averaged US$160 per carat. On the back of that, we were able to complete our feasibility studies on putting the mine into full production with an initial 1.2 million tonne per annum block cave on the 470m level.”

A mine for the 21st century

The Feasibility Study completed in April 2012 showed that DiamondCorp needed another 300 million rand to build and open a new underground diamond mine. The rest of that year was spent trying to find that finance, which Loudon describes as “a long struggle, in what was a difficult year for financing any mining project”.

But the struggle paid off and by the start of 2013, DiamondCorp had raised 320 million rand of project finance; 220 from the Industrial Development Corporation of South Africa and the rest from DiamondCorp shareholders, as well as debt for an offtake agreement with Tiffany and Co. of New York. This was a great boon for the company, particularly as Tiffany buys diamonds at commercial prices.

“What Tiffany is looking for is a surety of supply, and that’s an indication of the long term situation of the diamond industry, where the world’s supply of diamonds will be insufficient to fulfil global demand going forward,” comments Loudon.

“That’s because most of the known diamond sources in the world today will be mined out in the next 30 years, and there are not many undeveloped diamondiferous kimberlites left. There are about 5,000 kimberlites in the world and only about 500 of them have diamonds. Of that 500, only 50 have diamonds of commercial quality. So as you can see, it’s a rare geological phenomenon.”

With demand for diamonds set to exceed supply, the only thing diamond producers really need to compete over is financing. Nevertheless, as DiamondCorp has dug deeper into the Lace Project, it has found grades that far exceed those of its peers’ projects and which continue to increase with depth. Bulk testing demonstrated that the upper level of the project, comprising the waste-rock-diluted volcanoclastic facies of the kimberlite, has an average grade of 24-26 cpht. By the 600m level, undiluted coherent facies of the kimberlite, which microdiamond analysis suggests has a much higher grade of between 55-60 cpht, is volumetrically dominant.

DiamondCorp recommenced development of the underground mine, an estimated 24-month process in April 2013. The company expects to begin operations at the mine in the first half of 2015, after which it will begin to ramp up production to an average 300,000 carats per year for the first 10 years. Deeper block caves in even higher-grade kimberlite could ultimately lead to an annual output exceeding 500,000 carats. Over the 25-year mine life, approximately 30 million tonnes of kimberlite will be mined at an estimated average grade of 40 cpht.

Last year also saw the re-commissioning of the 1.2Mtpa dense media separation plant at the Lace Project, so that DiamondCorp could recommence the retreatment of the mine’s tailings. The plant was also optimised by changing the bottom screen cut size, to produce a coarser stone size distribution. The optimisation also allows DiamondCorp to recover 90 per cent of the diamonds in the tailings from less than 50 per cent of the tonnage, lowering its operational costs.

The greatest benefit of the optimisation was demonstrated when DiamondCorp completed its first sale of diamonds recovered from the tailings retreatment in November 2013. The sale comprised a total of 6,442.04 carats for gross proceeds of $278,574.30, representing sales proceeds of $43 per carat. The diamonds sold comprised 5,026.72 carats recovered before and during the commissioning of the plant, and 1,415.32 carats recovered after the plant’s optimisation. Significantly, the latter achieved a far higher price of $63 per carat.

There is currently around 3Mt of tailings left, which Loudon says should take 18-24 months to process. In the meantime, DiamondCorp will be finding further ways to improve the value of the operation. “We’re now looking at putting in place an in-pit screening system, so that we can screen out fine material before it gets to the plant and really increase the tonnage through port,” says Loudon.

“This will enable us to produce more than 6,000 carats per month from the tailings and to get most of the tailings out of the way before we start delivering the kimberlite from the underground mine.”

Over the next 12 months, DiamondCorp hopes to increase the throughput of tailings to 150,000 tonnes per month while continuing to develop the underground tunnels and conveyor belt system for the new kimberlite mine. First and foremost, Loudon explains, the Lace Project is intended as a “cash generator” for DiamondCorp.

“We’ve always stated that we see this as a highly cash-generative project. It has the potential to revenue more than $80 million a year for us, with net profits after taxes in excess of 50 per cent,” he says.

“So we see this as a cash generator, from which we can build a medium-sized diamond production company. On the side, we’re focused on finding other projects that have some scale to them. We’re not interested in being distracted by smaller projects and our expertise is definitely in underground mining – that’s a unique skillset for a junior company. If we can’t find a project that gives us that scale, then we’ll dividend out the surplus cash to our shareholders.”

Whatever comes after the Lace Project for DiamondCorp, it looks set to be a sparkling result for everyone involved.