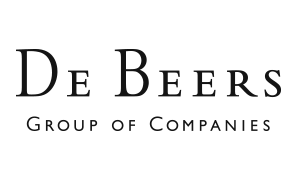 The jewel in Africaâ€™s crown

Diamond companies don’t get any bigger than the legendary De Beers. The group has been the world’s leading producer of diamonds since 1888 and today employs more than 23,000 people worldwide. Operating across the entire diamond pipeline, from exploration to jewellery retailing, the De Beers name is renowned around the world.

For more than 80 years, De Beers sold its rough diamonds from headquarters in London. But a historic agreement last year saw the miner up sticks and move its rough diamond sales to Gaborone, the capital of Botswana. De Beers deems its new office “the world’s most sophisticated diamond sorting, valuing and sales facility and… an excellent environment for De Beers’ global client base”.
Speaking at De Beers’ inaugural international sight at the Botswana facility in November 2013, Chief Executive Phillipe Mellier referred back to De Beer’s long history on the continent.

“Africa was home to the diamond industry when it began in the late 19th century and De Beers and its partners were central to that growth,” he commented.

“As we make this move, Africa is once again at the forefront as De Beers and its partners lead the diamond industry into a sparkling new chapter in its illustrious history.

“The relocation of our Sightholder Sales activity to Botswana, and the opening of this new Sight facility today, are a further demonstration of our clear commitment to beneficiation and to our partners’ aspirations to transform Botswana into one of the world’s leading diamond centres.”

As De Beers begins its first full year based in Botswana, Juliet Langton speaks to company spokesperson Lynette Gould in an attempt to dig deeper into the group’s game-changing move.

JL: What factors stimulated the relocation of all De Beers rough diamond sales away from London?

As part of that milestone agreement, De Beers agreed to transfer its London-based rough diamond sales activity to Gaborone, underpinning the long-term future of the partnership and helping to transform Botswana into one of the world’s leading diamond centres.

JL: Out of all the possible locations near De Beers’ mining operations, why was Gaborone chosen for the new Sight facility?

LG: Botswana is De Beers’ largest diamond producing country partner by a sizeable margin, and the country also has a domestic diamond industry that has developed fairly rapidly in recent times. Botswana has a young yet successful diamond cutting and polishing industry and several industry support businesses – such as those involved in diamond security, diamond grading and testing, diamond financing etc. – are already established in the country. All of this meant that Botswana was a logical location.

JL: How will the relocation to Gaborone benefit De Beers?

LG: With diamond demand and prices typically continuing to grow, De Beers has secured long-term and uninterrupted access to supply from some of the world’s best diamond mines. [The latest agreement on Debswana] is the longest sales contract ever agreed between the two partners and underpins the long-term future of one of the world’s most successful public/private partnerships. It also brings our sales operation closer to the major sources of our supply; Botswana, South Africa and Namibia.

JL: How will De Beers’ new Sight facility and business benefit the city, the country and the people of Botswana?

LG: The establishment of De Beers Global Sightholder Sales will help transform Botswana into a leading diamond trading and manufacturing hub, and has preserved a reliable route that will maximise the value of Botswana’s natural resource.

Around 200 representatives of the world’s leading diamantaires gathered in Gaborone in mid-November for the inaugural Sight to be held there and, with representatives of these leading international businesses travelling regularly to Gaborone, there will be benefits to the service sector – hotels, catering, entertainment etc. – as well as the opportunity for these entrepreneurs to invest in other domestic business opportunities.

The move is also expected to serve as a catalyst for economic growth across southern Africa with the region now the world’s primary source of rough diamond sales, creating further employment opportunities in ancillary services such as banking, security, IT and  supply chain. With the establishment of our new Sales operation there, De Beers has sourced furniture, equipment, and other products and services from local companies, providing immediate economic benefit to domestic suppliers.

In short, the relocation provides a springboard for economic development and diversification in Botswana.

JL: What factors did De Beers have to take into careful consideration when making the relocation?

LG: We believe the relocation of our sales operations from London to Gaborone is one of the largest north–south transfers of professionals, skills, equipment and technology to date. The relocation was announced in September 2011 and the first Sight took place in Gaborone in November 2013. To bring us to that point, a large team of dedicated professionals from De Beers and numerous Botswana government departments were involved in meticulous planning to ensure a smooth transition of our operations.

Furthermore, of the staff now working for Global Sightholder Sales in Gaborone, around 50 per cent of those are citizen employees, many of whom have been trained in highly skilled diamond handling roles. Our new state-of-the-art facility for the Sales operations was supported by investment in Gaborone airport by the Government to improve entry for Sightholders. Investment has also been made in technology and systems to ensure that the area can deal with the increased number of visitors.

Arguably, the biggest challenge to De Beers was a smooth transition from London to Gaborone, to ensure our Sightholders had no interruption to their supply from De Beers.

Although we had two years to plan for this event, we had to ensure that the final pieces of the jigsaw fell into place within a month – after the final Sight in London in October and in time for the first Sight in Gaborone in November.

Thanks to the hard work of the team on the ground, the first Sight was hailed a great success with all systems and processes running smoothly.

JL: Does conducting sales out of Gaborone bring any new challenges or risks for De Beers?

LG: There are some challenges associated with the relocation, such as the fact that some Sightholders now have to travel for longer to arrive at the Sights. We are, however, constantly working with our partners to find improvements to the current challenges and we are delighted that we have had such positive feedback from Sightholders on their experiences so far at the two Sights in Gaborone so far.

JL: What does De Beers aspire to achieve in Gaborone and Botswana, going forward?

LG: Following the success of De Beers’ beneficiation programme, which has helped to establish sustainable diamond cutting and polishing industries in southern Africa – in which more than 3,000 people are directly employed in Botswana alone – the relocation of our international Sightholder Sales takes our beneficiation commitments to the next level as we look to help establish a world-leading diamond centre in southern Africa.

We believe that our beneficiation activities are pioneering in many ways, as we are directly tying our commercial future to our efforts in the corporate responsibility arena; we are helping to drive economic development in southern Africa not by simply donating money or investing in projects, but by locating our major sales activity there.

We believe this will provide a halo effect for economic growth in the southern Africa region and support many more jobs in ancillary services such as banking, security and supply chain.

JL: What is your perception of the current market for rough diamonds?

LG: Retailer results for the early part of 2013 were mixed in the key consumer markets. The USA exhibited encouraging growth and China continued to grow, albeit at a slower pace and somewhat patchy.

Polished prices edged up during H1 on the back of moderate retailer re-stocking. High cutting centre stock, tight midstream liquidity and a weakening Rupee continued to create challenges for rough. We have, however, seen an improvement in demand for rough diamonds in the last couple of months and the forecasts for the crucial end of year selling season are positive. Sales of polished diamonds look to be improving, consumer demand is healthy in most major markets and cash is starting to flow back into cutting centres as sales are made – all of this is helping generate increased demand for rough diamonds.

JL: What are De Beers’ strongest principles and values as a company?

LG: Operating responsibly and sustainably sits at the heart of De Beers’ business strategy. It is our ability to create shared value – financial, social and environmental – with our partner governments, our employees, our customers and our communities in which we operate, that will ultimately deliver long-term success for our company.

A key example of this is beneficiation. In a world where resource nationalism has become a common theme across many mineral-rich countries, it is important that we also play a part in ensuring that the diamond industry has a responsible attitude and actively contributes to the promotion of in-country wealth and skills development.

This has been an historic philosophy for De Beers. In a visionary statement in the 1950s, Sir Ernest Oppenheimer said that our profits must be earned in such a way as to make a real and permanent contribution to the well-being of those people, and the development, of southern Africa. That philosophy is as true today as it was all those years ago, and is an inherent part of our business model.

JL: How was the last year for De Beers and what are the company’s major goals for 2014?

LG: We are cautiously optimistic for 2014, expecting moderate growth in diamond jewellery demand for this year, supported by improving sentiment in the US market and continued growth in China.

Our vision at De Beers is to unlock the full economic value of our leadership position across the diamond pipeline. In spite of a changing world – a volatile global economy, shifting consumer demographics, new technological innovations etc. – one thing has always remained constant. Today and throughout our history, there has been only one source of real value in our industry, the consumer’s desire for diamonds. Consumers view diamonds as a store of emotional and financial value and we must protect and maximise that at all times.