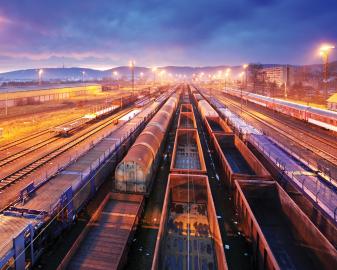 South Africa’s railway sector has been in dire need of upgrade for several years. However over the last five years, the industry has been seeing an influx of investment and has become a focal point for the government who is now putting South Africa’s railways within its top priorities. Passenger Rail Agency of South Africa is one of the organisations that has been leading some of the most recent developments in the commuter rail and transport sector, and its recent multi-billion dollar tender is gearing up to get underway.

Historically, road and rail based passenger services in South Africa were provided by the South African Transport Services (SATS), a state-owned entity. But from April 1990 onwards, these functions became the responsibility of Transnet Limited and the South African Rail Commuter Corporation Limited (SARCC), with the former responsible for long-distance road and rail passenger services and the latter taking care of commuter rail services. Over the years new divisions and subsidiaries were formed to manage different areas of the sector, but the lack of clarity between the groups led to issues that ultimately impacted the maintenance of the railways.

As such, in 2006 the National Rail Plan was approved by Cabinet with the goal of identifying the funding and investment requirements for the country’s ageing passenger rail, especially in light of the quickly approaching global event that would be arriving on South Africa’s doorstep in 2010, the FIFA World Cup.

At the forefront of the government’s efforts to transform public transport in South Africa, in 2009 the Passenger Rail Agency of South Africa (PRASA) was born, consolidating all of the passenger rail entities to better manage and aggressively address the under-performance of rail passenger services into something more modern, efficient and customer-focused as well as champion some much needed investment in the sector.

“To be quite frank, it has been a long time. Over three decades of under investment in the rail industry and it has gone through a considerable decline, which has been problematic for us,” says Piet Sebola, group executive of Strategic Asset Development with PRASA.

He explains that other than some new trains that were brought on in the mid-80s, much of the technology in South Africa’s railways have been there since the 1950s.

However, with major focus now coming from the government, as well as several new developments in the works, the railway is poised for some serious growth.

The organisation consists of three divisions and two subsidiaries. The divisions are split between: a) PRASA Rail Operations, which is the rail operating division that manages commuter rail services in urban metropolitan areas under Metrorail, as well as long-distance inter-city and cross border train services under Shosholza Meyl; b) PRASA Corporate Real Estate Solutions, which manages PRASA’s property portfolio and station upgrades and improvement programme; as well as c) PRASA Technical, which is responsible for managing the company’s rolling stock depots as well as the engineers who provide maintenance for the trains.

The company also has two subsidiaries, including Autopax, which provides long-distance bus services from city-to-city, as well as Intersite Investments, which is responsible for developing and growing the assets portfolio of PRASA to generate revenue for the group.

PRASA says its critical objective over the next few years is to modernise the existing passenger railway system in order to meet the challenges of a contemporary society. This means implementing plans for the modernisation of the signalling, telecommunications systems, stations, security, rolling stock and train operating systems.

In fact it’s these projects that have much of the industry across South Africa, and abroad, anticipating with excitement for what’s to come. In a sector that has gone through a drought of investment and innovation for almost 30 years, these recent tenders PRASA has been releasing over the past two years has caught the attention of operators, manufacturers and suppliers from across the globe, eager to tap into Africa’s growth story.

Some of the greatest buzz is around the railway operator is its R123 billion rolling stock renewal fleet programme, a 20 year investment strategy to replace PRASA’s existing fleet and allow for expansion to accommodate growth and planned extensions to the PRASA network.

In December 2012, PRASA announced that the Gibela Rail Transport Consortium, consisting of French multinational Alstom and local engineering company Actom, won the contract of R51 billion to supply 3,600 vehicles and create 8,088 jobs over a 10 year period starting from 2015.

Gibela was one of seven bidders vying for the ambitious project, and Sebola says they are currently in the process of negotiating the finer details of the contract, including working to procure a suitable BE partner, with everything to be finalised by end of July 2013.

In March, PRASA also signed a R450 million contract with Chinese information and technology giant Huawei for a new digital signalling radio system for its train communication and management that meets the necessary modern safety requirements, replacing its current radio system that has proved to be inefficient.

According to reports, this new system will have a 1,200 kilometre fiber optic backbone and will initially provide communications between drivers and control centres, as well as eventually offering automatic train protection functionality.

“There’s a lot of work ahead of us. We’re not going to change the railway overnight. It’s going to take it’s time, but we have to make sure the building blocks are in place to ensure we achieve our main objective, which is to put rail in the centre of public transportation in this country,” says Sebola.

South Africa’s rail industry is one of many investment stories coming out of the continent and in June, PRASA, along with representatives from various other rail operators across the continent like Mozambique’s CFM, Tanzania’s TAZARA and Nigerian Railways, will be coming together at the 16th annual Africa Transport and Infrastructure Show in Johannesburg to network and share lessons learned over the years.

“We always look forward to the Africa Rail. It’s a time when Africa can connect and we can say ‘this is what is going on in South Africa, what’s going on in the rest of Africa?’ That’s always important from an operator point of view and from an investor point of view,” says Sebola.

What he hopes is a major part of the discussion is talking about how Africa can achieve rail integration across borders to not only make it more efficient for commuters to travel between countries, but to boost intra-African trade.

“In 20 years’ time, we will not have a reason why Africa can’t have high-speed integration railway system. Why can’t South Africa connect with other parts of Africa’s railway? We don’t have an excuse for that,” he says.

However, prior to getting there, Sebola recognises that South Africa and other growing economies, like Nigeria, Zimbabwe and Kenya, will have to see some maturity in their rail sectors with “commuter rail taking a centre stage,” and events like Africa Transport and Infrastructure Show are an important step in getting the right conversations happening to achieve those goals.

“We’re going to work very hard in the next five to 10 years and we want to see changes and offer service excellence,” says Sebola. “Our cities will not survive with inefficient public transportation. We want people to be able to predict their travel time and make sure that rail is facilitating the movement of people as efficiently as possible in a cost-effective way. It’s going to take a lot of work to make sure it becomes a reality, but we want rail to take centre stage from a transport perspective.”