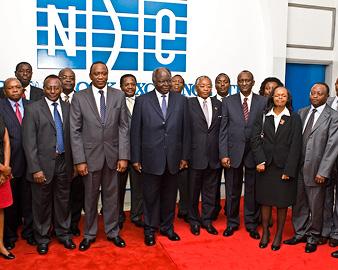 Value at its core

Built upon a foundation of corporate social responsibility, Kenyan supermarket chain Uchumi strives to share the benefits of its success and growth with its local community.

Uchumi may be the oldest supermarket chain in Kenya but its loyalty to local suppliers, humanitarian values and socially progressive aims make it a forward-thinking company with its eyes on the future. It employs more than 1,000 people and has 21 branches overall: 18 in Kenya (12 of them in Nairobi), two in Kampala, Uganda and one in Dar Es Salaam, Tanzania. The retailer was set up in 1976 to ensure two things, says marketing manager Francis Kiragu: “equitable affordable distribution of essential goods to the Kenyan public and a local sales outlet for the local manufacturer.”

Despite having a bumpy ride along the way – the supermarket chain was declared insolvent in 2007, before making a comeback in 2008 – Uchumi has stayed true to its roots and remains very much dedicated to developing the country and its people. “We believe that by empowering the Kenyan businessmen and women we are all playing our role in growing the national GDP and improving the living standards of our countrymen,” Kiragu says.

“Our entry into Uganda and Tanzania has seen these general guidelines followed – we offer native suppliers first priority to provide essential goods at competitive prices,” he adds, stressing that its support for suppliers in the region is very important to Uchumi, as well as a defining quality. Another thing that differentiates the retailer is its listing on the stock exchange, meaning it is partly owned and governed by the Kenyan public.

Uchumi was only relisted on the Nairobi Stock Exchange last year, five years after it was suspended. In those five years the supermarket chain has progressed in leaps and bounds. In 2008, a year after being declared insolvent, Uchumi returned a profit of 106 million Kenyan shillings (KSh) against a loss of 257 million the previous year, amounting to a turnaround of KSh 356 million. The last recorded profit prior to this was back in 2001. Kiragu says the company’s past misfortune has made Uchumi more “fierce” in ensuring past events never happen again, and now serves as a “lesson” on what to avoid.

“Uchumi Supermarkets Ltd is a new company, governed by new management and a new board,” Kiragu explains. “We’re geared towards improving our circumstances, not dwelling on what happened in the past. This new attitude has changed our operations, relationships with key stakeholders and indeed our fortunes.

“We work with our values in mind; we work harder and watch our environment more closely to ensure that we are effective and efficient. The team at Uchumi has shown its commitment and loyalty to turning the company around.”

One element of Uchumi’s “new attitude” is embracing partnerships with its suppliers, media, agencies, investment experts and others. “Partnerships have enabled us to focus on what we are good at – and that is retail business,” Kiragu says. “Since our partners are experts in their lines of business, this allows us to be experts in our own.

Another is its pursuit of advanced technology, which certain expert partners have helped Uchumi implement. “We support most major payment modes, including Visa cards and mobile payments,” Kiragu says. “We are in the process of upgrading our website to be more integrative. We’ve also introduced major payments into our system, including electricity bill payments, equity bank cash-back services and insurance brokerage services.”

Other new ideas concern something quite different: corporate social responsibility (CSR). Over the last few years, Uchumi has set aside two per cent of its total marketing budget towards activities targeted to address environmental, health and education issues in its local community.

“As a retail chain owned by the public, we strive to give back to our community,” Kiragu says. “We encourage all branches to support causes around them that uphold development, sustainability and equality, and which generally improve the living standards of people around them.”

Uchumi has raised money through events such as marathons for treating children at Nairobi Hospital; funding educational centres, including the University of Nairobi, Kenya Methodist University and Kenya Institute of Management; and assisting with school fees for bright students. The supermarket chain is currently making the final preparations to its CSR policy 2012/13, ensuring no issue has been overlooked.

A sense of social responsibility can also be found within the company. “Our policy is to employ all races, backgrounds and gender in the country of operations. We do not discriminate,” Kiragu says. Staff are encouraged to seek out training in their own areas of interest, in addition to the mandatory company training they receive in areas such as first aid and customer service.

Bolstered by recent success and new initiatives, Uchumi is preparing for major growth over the coming years. It is building two further shops in Uganda that are expected to open in this fiscal year’s final quarter, as well as one in Ongata Rongai, Kenya, which is near completion. Uchumi also wants to establish additional branches in Tanzania and Kiragu says the company is “confident in growing its presence in this country and in the region as a whole”. In 10 years’ time, Uchumi wishes to have made its vision, “to be the supermarket of choice in the Eastern African Region – the Home of Value”, a reality.

To get there, says Kiragu, the company will follow its core values: integrity and transparency; networking (sharing effective communication at all levels of the business); teamwork; commitment and accountability (particularly to its stakeholders); quality service; professionalism; and the aforementioned social responsibility.

“Through our core values, our service and quality standards have stayed uniform across board; performance easily rated and appreciated; and errors easier to detect and eliminate,” Kiragu says. “We have attracted, retained and grown talent by staying the course. In the rapidly changing business environment, massive organic growth and cut-throat competition, our core values have helped us to stay grounded to what is truly important to us – our stakeholders,” he adds.

It is Uchumi’s stakeholders whom Kiragu credits for the company’s triumphant comeback and growing success – and he sees this as the perfect time to thank them. “We are grateful to all our stakeholders: governments (Kenya, Uganda and Tanzania); shareholders; bankers; investment experts; security exchange; customers; suppliers; employees; board and management; and the media for the unwavering support they have shown us,” he says.

“The 31 May 2012 marks exactly one year since we were relisted on the stock exchange and the share price is showing gradual steady growth. We could not have done this without them.