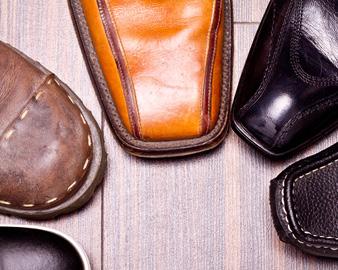 Expanding the footwear industry, one step at a time

In 2002, the SA Footwear and Leather Export Council was officially recognised and registered by the Department of Trade & Industry as a not for gain company, spawning a vision to facilitate the growth of exports in South African manufactured footwear.

SAFLEC is administered by the South African Footwear & Leather Industries Association (SAFLIA), and has offices in Pinetown, Durban. Paul Theron, The Executive Director, spoke with TABJ about the importance of this industry in South Africa and how the association is growing its reach.

According to SAFLEC, its vision is to “facilitate the growth of exports of South African manufactured footwear and thereby the growth in the number of exporters.” Theron says that the association works diligently on behalf of the footwear industry, and that since inception the organization has seen both small and large companies take notice of the work the Council does. “We’re now seeing interest from smaller companies who weren’t always represented before,” he explains.

“We now represent over 100 companies in manufacturing, artwork, and other areas of footwear development,” he adds, “and we promote exports of these products on behalf of the industry as a whole.”

SAFLEC promotes outsourced work and finished products of a lot of smaller companies, and Theron says the organization is not concerned as much with “bigger companies who already have export markets.”

Emerging companies are being nurtured and supported by SAFLEC through exposing those companies to the international standards of exports. According to the Council: “Through such growth, it is envisaged that the SME’s will grow in leaps and bounds.”

SAFLEC conducts detailed analysis of export trade statistics on a quarterly basis, and distributed this information to members to help them assess market strength and formulate strategy for their businesses. “Essentially, we’re trying to train SMEs to be export-ready,” Theron says.

SAFLEC, in conjunction with SAFLIA, is involved with joint training initiatives for workers in the footwear industry, offering sector-specific training. Theron says that SAFLIA is the “training authority” in the footwear export industry, and thus far, programs have been a success.

“SAFLEC, in conjunction with SAFLIA and the CTFL SETA, is involved in facilitating machinist training and other skills development projects.  This activity forms part of the greater strategic plan for the industry. This training initiative also focuses on SMEs and historically disadvantaged groups,” says the organization.
SAFLEC covers training for machinists, and develops all the materials necessary for these programs as well as evaluates them. “Once we see that a class is working, we’ll roll it out to assist other companies—this is part of our customized sector program, part of our industry strategy,” Theron says. “Training is one of the major initiatives—you can’t compete if you don’t train.”

Theron adds that the footwear industry in SA boasts a tremendous labour force, and one that needs to be cultivated to thrive. “We have a very advanced labour market. All the companies we represent are at advanced stage labour standards.”

SAFLEC is also involved in a non-profit called Soul of Africa, a footwear company that provides employment to Africans through shoe-making.

In SA, only a few companies are involved in fashion footwear, but the export market as a whole is fairly diverse, with exports into the U.K., Australia, and Europe for African-made products. “Our main goal with SAFLEC is to expand our export capability, and create awareness in the industry of what can be done in footwear exports,” Theron says.

“We already have a footprint in Africa, so beyond that we’re taking one step at a time,” he concludes.