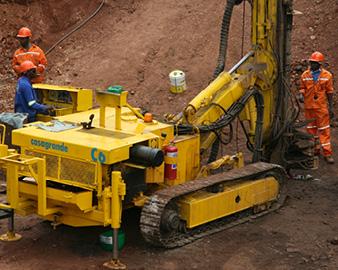 To say that GeoGroup has its fingers in a number of pies would be an understatement. The energy and mining luminaries have been responsible for passionately using innovation, technology, environmental awareness and creativity to transform several industries.

The GeoGroup, as the intro suggests, is a veritable labyrinth of highly specialised services. Within this central hub, there are a whole host of satellite companies, all of which have a close relationship with each other. These linked in activities mean that clients are often able to rely on multiple GeoGroup services for a single project. The head office in Johannesburg has never seen its family of businesses in such good health!

One of the companies, Geomechanics, is the flagship venture and has been trading for nearly a quarter of a century. It specialises in geotechnical investigations, railway lines, bridges, tunnels and large civil engineering projects, while also focusing on geological research for mineral exploration.

The ventures that the GeoGroup represents in terms of drilling are generally situated in the Johannesburg area in Pretoria, but it also operates extensively throughout the country, branching all over the coast.

The impressive portfolio also includes TerraPower Solutions, which specialises in renewable energy projects. It works in conjunction with General Electric, developing wind and solar farms in the Eastern Cape region of South Africa.

Meanwhile, GeoPower Africa is a diesel generator supply company that rents and sells generators internationally. It keeps a large stock of generators in Johannesburg.

A splendidly-named company called GeoCrush screens rock for civil construction, while Green-a-Planet is an indigenous nursery, which grows trees in bulk on a wholesale basis, for developers and companies requiring trees.

In order to accommodate this burgeoning collection of enterprises, the GeoGroup has access to over 4000 square meters of factory space, which is situated near the airport at Lanseria.

Ahead of the game

Dave Rossiter—a man for all seasons—has been at the helm since those halcyon days when the company began its journey, back in the late eighties. He has witnessed the early gambles pay dividends and believes the company’s increasingly expansive range of services as well as its diversification into different regions, has been pivotal to its sustained success.

“We’ve grown from a one rig outfit, to a 75 rig business, so we’ve always looked further afield for work,” he enthuses. “To provide a constant flow of work to the company, we’ve established ourselves, not only in South Africa but also Malawi, Mozambique, Zambia and Liberia, with several successful ventures.”

The group of companies have always been progressive, ambitious and technology-friendly enterprises.

“I think in the last 10 years the most radical changes have been diversification into different forms of drilling and different types of machinery which, in turn, provide services for different requirements related to exploration and geotechnical work,” says Rossiter.

“We enjoy finding solutions and producing results. Client issues have become a very prominent feature of the way in which we do business,” he adds.

The GeoGroup is committed to doing minimum harm to the environment, while providing maximum support to the local communities and employing the best technologies available. Its strength lies in its entrepreneurial abilities, understanding of the African culture, experience of working conditions and ability to cross the borders into neighbouring countries.

As the energy resource landscape changes and attitudes towards alternative sources alters, the company has relished the opportunity to move with the times and has sought to expand into new, and forward-thinking areas. In doing so the group has created an abundance of new options for its clients.

“Over the last few years we have become passionately involved in the geotechnical studies for wind and solar farms in this country,” Rossiter explains. “These techniques are the future for much of the business; it’s something which will affect the entire industry in South Africa and we want to be at the forefront of the revolution.”

The green initiatives are sure to give a boost to the company’s trading platform and, with the government likely to listen to proposals for power purchase agreements soon, the company is in a prime position to take on public sector contracts.

For Geomechanics it’s a particularly exciting time to be involved in the alternative energy market. Unlike many other companies it has carefully done its homework, enthusiastically getting involved in green ventures from the beginning, building up knowledge and experience, and preparing the business for the increasing demand for alternative sources.

“We commit to continual improvement in our performance, efficient use of natural resources and aspire to a zero harm to people and the environment policy,” says Rossiter, reassuringly.

In a changing world, companies need to be able to change too. Refreshingly, GeoGroup is all about diversification, technology and flexibility. Above all, however, it’s about choice and the company has made a few that have—quite literally—changed the landscape and people’s lives forever.